The completed vinyl wrap of the New Forest as seen at Waterloo
BRIEF
During late July 2016 I was contacted by GTB agency in London asking if I was interested in working with them on a project for South West Trains (SWT), a railway company serving mainly the South Western area of the United Kingdom. I was delighted to accept the challenge! At the time the campaign was to feature a number of trains, typically found on the route between Waterloo (London) and Weymouth, and give them a 'vinyl wrap', with artwork created by six artists. The artwork from each artist was to feature locations along the route, the painting conveying their inspirations and observations of the area. I picked the New Forest national park, a 566 km2 area of various types of landscapes, that lies between Bournemouth and Southampton.

There was no requirement to feature a train within the artwork, but I thought the notion would go down well with interested parties. I also knew the exact location that would suit my concept, which is a location just south west of the town of Brockenhurst, itself served by SWT. What made the area great was that the landscape is quite flat moorland, with a covering of heathers and few trees. The railway line is quite visible in this open location and does in fact split here too, with the main line continuing to Weymouth and the branch line going to the coastal town of Lymington. One other important factor in any image relating to the New Forest is the amount of livestock that is able to freely wander around the entire area, so it was important to feature animals in the work. So this location meant I could show the forest as viewed by passengers, with a flat landscape that would suit the (landscape) format of the train, and have the added interest of animals to give extra charm to the painting, and finally have a SWT train in the background.

working template with photo monfage
CONCEPT
A few days later I received a template of the body side area that was to receive the vinyl print from the agency, which would then allow me to experiment with my concept visually. I gathered some other photos of visits to the New Forest, plus some photographs of other paintings of mine and created a rough composite picture based on the working area on the template, and presented this to the agency and client, SWT, which was met with approval. When working with the template I took care to make sure that elements within the painting would not be obscured by the window areas and that things of interest would fall between the window areas, to make sure that the image is pleasing to the eye as seen by the expectant passenger! Later, one Saturday during a beautiful August morning I visited the location on bicycle and took lots of photographs for reference. It was perfect conditions for what I wanted to show of the area, the trains and the animals.
The next stage was to refine the concept based on the one approved of a few days previously, and refine it using the latest reference material obtained in the forest, which in turn allowed me to 'nail down' the proposed composition. In turn this was approved. Some of the elements had minor 'shunts' to allow for pieces of promotional text to be placed on top of the painting again to avoid important details being covered up. Once everything was approved I could go ahead and do the painting.

base ground colour with drawing in acrylic
PAINTING
I ordered a large canvas that was 150cm x 100cm. The canvas/ painting was not intended for exhibition but just as a functional surface to paint on. This is why in the photographs accompanying this article, show the painting only uses half of the canvas area, as that reflects the bodyside area of the train. The first painting stage is to paint an orange 'ground' or base colour. I do not like painting directly on white, and some of the orange will still show in the finished result. Following this I drew a numbered grid across the canvas which corresponded to a grid drawn on my concept. This allowed me to scale up the plan accurately and on which I then drew, in brown acrylic paint, the features of the painting like the trees, horses and train.
Once all of the elements are down I was then able to paint base colours, in darker hues, which acts as an underpainting. After the paint had dried I was able to paint the final 'viewable' layer of top, with the correct hues and tones, all in acrylics. Because of the short time to create the painting acrylic paint was used because of its fast drying properties. I do also paint in oils but they are slow drying and I would have missed the tight deadline by several weeks!
After approximately 12 days the painted artwork was finished. The next stage was to photograph it carefully and then bring the image in to the computer domain. As the artwork was large and needed to be recorded in fine detail, a number of photographs of different areas of the painting were taken separately and within Photoshop the sections were rejoined to make up one large photograph. I then placed the body side template and my rough concept in to the same image file at different visual densities so that I was able to line up the big photograph with the template accurately. When the positioning was correct I then removed those guiding elements so that I just had the finished image in front of me. The very last step was then to carry out some colour correction to bring the colours in the photograph back to how they looked on the painting itself.
The finished computer file was then sent on to the agency for approval. Once approved, and backed up, the original painting was destroyed! This is because it was only designed to be seen on the train, where the layout fits the side of the rolling stock. On its own the painting was quite ugly as a composition, though this was expected, the effort being put in to the art to making it work in context with the train. Also the picture was far too big to keep around, and was always in the way in my home, no matter where it was stored! 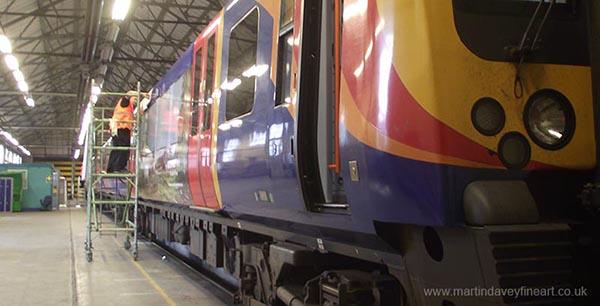 A set of vinyls being appled to a class 450 EMU
APPLICATION
During October I was kindly invited by SWT to see the vinyl wrap actually being applied on to the trains. The two units 450112 and 450118 of the class (450 EMU) were to be used. My painting would be applied four times on each 4 coach unit, twice on each side. This means that the painting had eight 'copies' in total that would be viewable to passengers travelling on the region. 'Strawberry Hill' depot, in south London was the location of where the work was to be undertaken. Most of the vinyls had been applied to the one unit in the depot at the time as I arrived, the other unit was to be done at a later date.
I remember on arrival I could see through the small Victorian windows of the depot building, small hints of the artwork that had been applied and its scale and detail, and I was pleasantly surprised at how clear it looked. When I finally came face to face with the vinyl the scale was quite impressive and I was very struck by how good the printing and colours were, especially when considering how many times the artwork had been enlarged! The vinyls were created by Aura Graphics and were created in sections to be applied by hand. I was surprised however to see that the window glass had retained the vinyl, expecting to see clear glass. While there I took photos of the work and was also asked to pose by the train for various official photographs and some video footage. A time lapse movie was also made of the application process.
LAUNCH
On November 14th the trains were finally revealed at a small press launch held on platform 14 of Waterloo station. The unit arrived, carrying passengers. Once they had all gone then the people invited, mainly from the interested parties in the production of the campaign and interests in the New Forest, turned up and a number of photos were taken with some brief speeches. It was also the first chance to see the great art work by Caz Scott who provided the painting of Durdle Door, a part of the coastline of Dorset, and who's artwork shares space on the trains.
To conclude it was a great commission to produce and I met lots of nice people during the time. I thank the agency GTB and South West Trains for the opportunity to produce the painting for their promotion.
© Martin Davey Fine Art