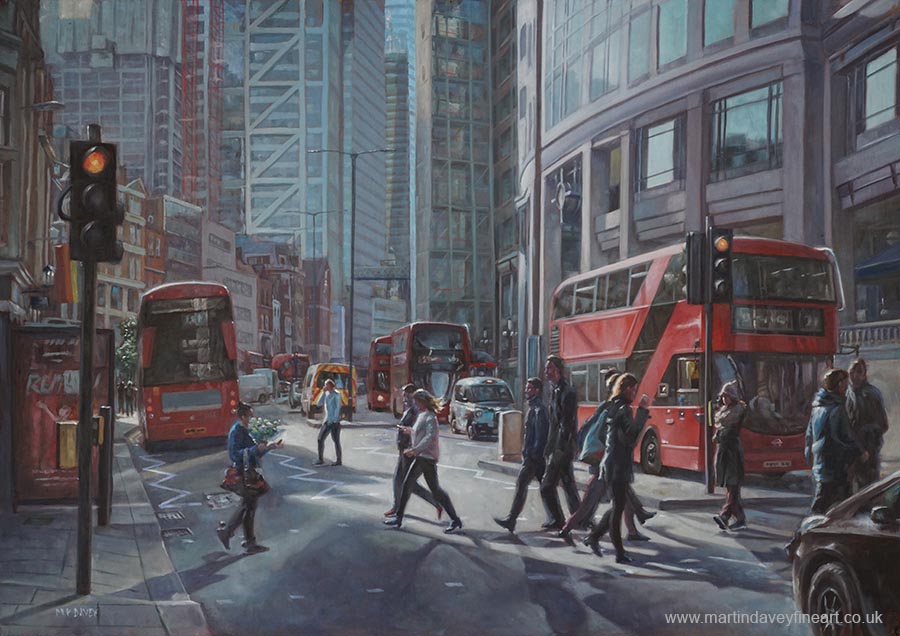 Plenty of red buses are to be found in this London street scene (6 in fact). The area is Bishopsgate, very near to Liverpool Street station, and the view is looking south towards the main financial district of the city.
Based on a Roman sited gate, Bishopsgate was rebuilt in the 1400's and rebuilt in the 1700s, before being demolished in 1760. It often displayed the heads of criminals. The area is now full of business buildings, mainly for financial companies, and many old inns and pubs, but has very few local residents despite being a very busy location. The area of Spitalfields would be accessed to the left. During 1994 an IRA bomb was set off in the area, a year after a smaller terrorist bomb.
The scene is captured on a sunny day with long shadows being cast by the people crossing the road, and it is to be noted that further shadows are cast by light bouncing off the main building on the right hand side. Interestingly there is no sky visible in this London landscape painting, as it is obscured by the taller buildings under construction within the financial district, in the (pollution filled) distance.
This painting is done in oils on mounting board, sized at 33” x 23”, and was completed during early May 2019.