Titanic at sea: full speed ahead 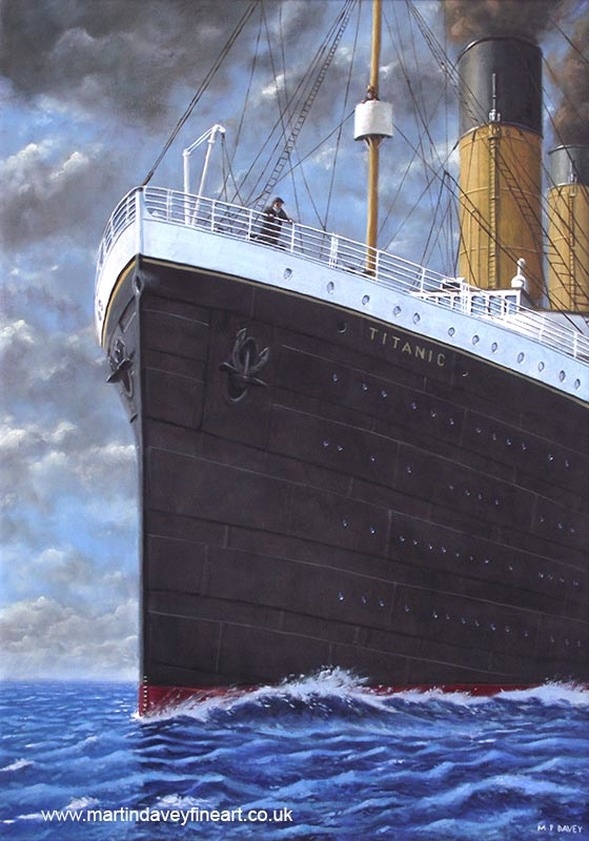 This is one painting of a set of two depicting the Titanic, the ship in the famous marine disaster of April 1912. They are both painted larger than my usual oil paintings, at a size 27.5" x 19.6", though did not take that much more time to do than normally. Drawings were prepared from looking at many photos, drawings and paintings of the ship. I thought it important to get as many details correct, though I'm sure I have missed some fine details! But hopefully the right impression is created as the ship looks 'right'.
In this picture I wanted to convey the bulk of the ship, and its unstoppable power. It seemed that a low angle shot was required to convey this although it means that most of the canvas is painted black! But I like to think that in this case it is allowed, the ship is black in reality. The big dark, man made shape has an interesting quality slicing through the naturally curvy, colourful water of the ocean.
The lone figure standing near the Titanic's bow mainly is there to give an idea of scale. There is another figure, almost hidden, in the form of a lookout posted in the crows nest, on the large mast. I suppose the painting is not a happy one despite its drama. The main figure is perhaps contemplating his future on the trip to New York. In the sky heavy clouds can be seen, mixing with the dense smoke gushing out of the funnels, indicating the relentless power of the Titanic.