Titanic wreck: save our souls 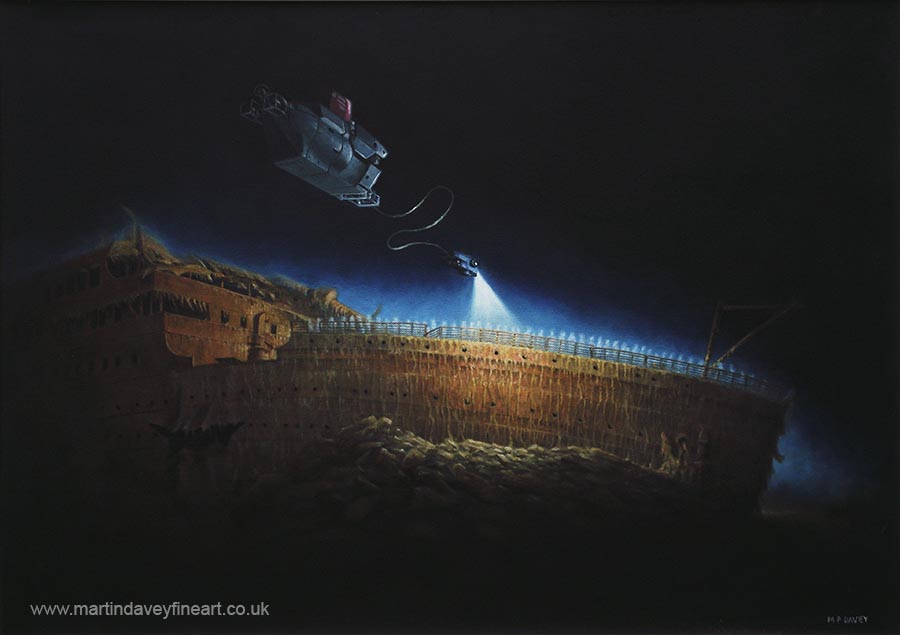 This is one painting of a set of two depicting the Titanic, the ship in the famous marine disaster of April 1912. They are both painted larger than my usual oil paintings, at a size 27.5" x 19.6", though did not take that much more time to do than normally. Drawings were prepared from looking at many photos, drawings and paintings of the ship. I thought it important to get as many details correct, though I'm sure I have missed some fine details! But hopefully the right impression is created as the ship looks 'right'. This picture depicts the wreck of the titanic. The painting may look odd in terms of perspective, but is correct. When the ship hit the ocean floor the bow buckled and was forced to pointing slightly downwards when compared to the rest of the ship. This then caused a hole to be ripped on the hull, on the left side of the painting. Additionally the ground has been forced upward by the bow digging in to the sea bed. Of course the image is a 'fantastical' view. In reality the view is pitch black at this depth in the ocean. The light from the submarine would never be able to light up the ship like this. But close up photographs do reveal a vibrant, orangey/ red colour to Titanics hull, with the yellow 'rusticals' running vertically down. The submarine itself is based on 'Alvin' , the vehicle that discovered the Titanic, together with the small robotic probe tethered to the main unit. Finally the mysterious lights lined up along the bow are up to the viewer to decide. They could be the 'lost souls' awaiting rescue!