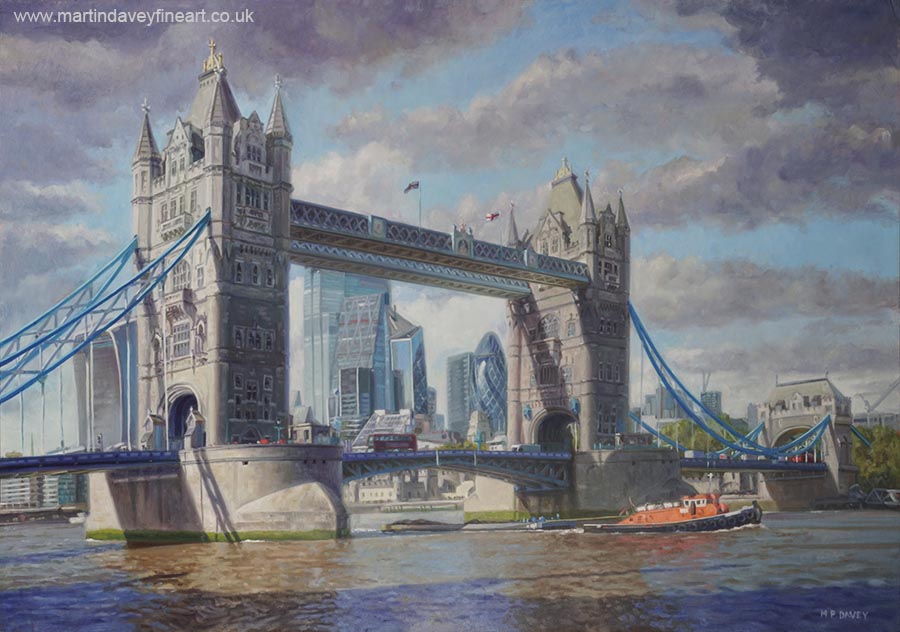 Painted in late 2020 this architecturally based artwork features a very famous London landmark, Tower Bridge. It was built between 1886 and 1894 and crosses the River Thames, the bridge linking the north and south sides of central London. The structure consists of two towers which carry the road via a cable suspension system. Between the two towers the road section is in two sections which open upwards, with the machinery to lift the two sections housed in the bases of the towers. Originally they were steam operated with the engines housed in a building, now a museum on the river bank. The two walkways are designed to strengthen the whole structure when the bridge is opened. The bridge is more like a very large machine encased with a gothic style brickwork rather than a conventional building, with the towers themselves having a steel framework construction.

Sir John Wolfe Barry was appointed engineer and Sir Horace Jones the architect, and the winning design out of over 50 entries. A stipulation was that the opening has a clear width of 200 feet (61 m) and a headroom of 135 feet (41 m).
The view as seen is from what would have been old warehouses (Butler's Wharf) on the south side of the Thames. Between the towers can be seen a number of famous and large buildings, some very recent. These represent the powerful, financial district area of London.
This London landscape is painted in oils on mounting board, sized at 33” x 23” approx.