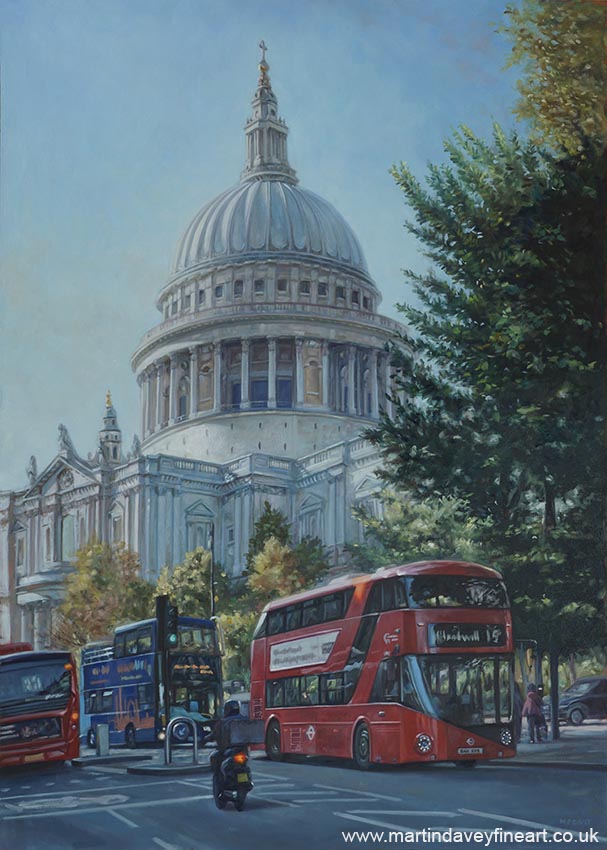 This oil painting is of a south easterly view of the magnificent St Paul's Cathedral in the city of London. Built by Sir Christopher Wren and opened in 1711, and fully completed in the 1720s, work originally started after the great fire of London (1666) destroyed the previous building. It was intended to repair the foundations and remains and use these for the new building .However it was found that is was better to largely start again. It remains the second largest church in the UK and was the tallest building in London up to 1967, and is ‎365ft in height.
In this view can be seen Cannon Street, with a selection of buses using it. The prominent bus is a 'Boris' bus, a new design taking inspiration from the original Routemaster, 'the' London bus famous to tourists. The design was ordered by the mayor of London (Boris Johnson) in 2008 built by Wrightbus and the first one was delivered in 2011.
This London landscape painting is produced on acid free mounting board, sized at 33” x 23” approx, and was worked on during December 2019 through to early 2020.