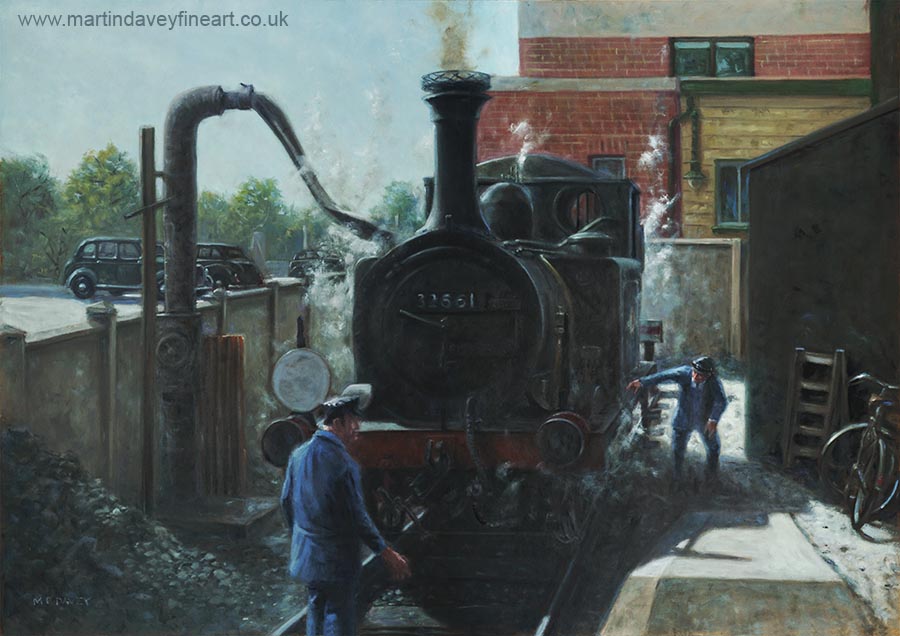 A railway locomotive at a British Railway station taking on water is the subject of this oil painting completed during early November 2019. The station is at Havant in the south of England, UK, and the locomotive parked in the station bay is a small tank locomotive known as a 'Terrier', its proper name being a LBSCR/ SR class A 0-6-0T. This type of locomotive were built in around 1872 and were still in service up until the 1960s, and quite a number of the pretty and popular locomotives have been preserved. The water tanks are mounted on either side of the boiler and the large rubber flexible tube carriers the water to them from the water pipe outlet on the left hand side. The painting is based on a very poor photograph taken in 1957, which was mostly taken in shadow and was blurry. To produce the painting a lot of research was done so the the locomotive (32661) could be accurately drawn as well as the surrounding area. As these engines were in use for some considerable time and had various modifications and alterations made to some examples, I found pictures of the actual locomotive to work from. The cars in the background car park were suggested in the photo, but too difficult to make out so again they had to be researched. There were two figures (the crew) in the original picture but a friend was asked to pose instead and then these new figures were painted in.
The painting is sized at 23” x 33” approx, and is painted on mounting board.