Voyage of the Mayflower in rough seas 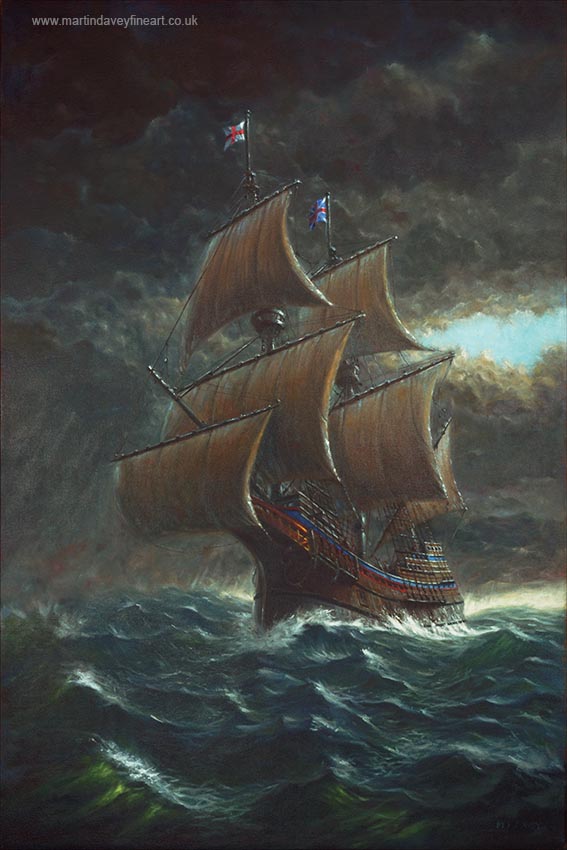 This painting was created during September/ October 2019 and features the Mayflower on its famous voyage during rough seas in the North Atlantic in 1620. The ship had 25/ 30 crew members and 102 passengers, Pilgrims from Holland and the UK. The ship left Plymouth (UK) in September and completed its voyage to the New World in November. The ship is a small cargo design, not designed for ocean voyages and was already quite old. It was square-rigged with a beakhead bow and high, castle-like structures fore and aft which protected the crew and the main deck from the elements. It is estimated the ship was 100ft long as the actual design is unrecorded. As it was designed for cargo use the passengers had a rough journey, and had to share space with the cargo. Originally a second ship (Speedwell) was to have sailed with her but at Plymouth it was found to be unseaworthy, so the contents and passengers were moved to the Mayflower, creating a further lack of space. The ship was probably scrapped in 1624.
The painting is done in oils on a canvas measuring 24” x 36”. It was done for the Southampton City exhibition to coincide with the '400 year' celebrations but was cancelled due to COVID19. An online exhibition was held as a replacement.